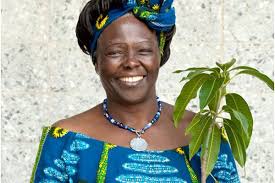 Wangari Maathai, Tree Mother of Africa, believed that a healthy environment helped improve lives by providing clean water and firewood for cooking, thereby decreasing conflict.  The Kenyan organization she founded planted 30 million trees in hopes of improving the chances for peace, a triumph for nature that inspired the United Nations to launch a worldwide campaign that resulted in 11 billion trees planted.

NAIROBI, Kenya — Wangari Maathai, the Kenyan environmentalist who began a movement to reforest her country by paying poor women a few shillings to plant trees and who went on to become the first African woman to win a Nobel Peace Prize, died here on Sunday. She was 71.

The cause was cancer, said her organization, the Green Belt Movement. Kenyan news outlets said that she had been treated for ovarian cancer in the past year and that she had been in a hospital for at least a week before she died.

Dr. Maathai, one of the most widely respected women on the continent, played many roles — environmentalist, feminist, politician, professor, rabble-rouser, human rights advocate and head of the Green Belt Movement, which she founded in 1977. Its mission was to plant trees across Kenya to fight erosion and to create firewood for fuel and jobs for women.

Dr. Maathai was as comfortable in the gritty streets of Nairobi’s slums or the muddy hillsides of central Kenya as she was hobnobbing with heads of state. She won the Peace Prize in 2004 for what the Nobel committee called “her contribution to sustainable development, democracy and peace.” It was a moment of immense pride in Kenya and across Africa.

Her Green Belt Movement has planted more than 30 million trees in Africa and has helped nearly 900,000 women, according to the United Nations, while inspiring similar efforts in other African countries.

“Wangari Maathai was a force of nature,” said Achim Steiner, the executive director of the United Nations’ environmental program. He likened her to Africa’s ubiquitous acacia trees, “strong in character and able to survive sometimes the harshest of conditions.”

Dr. Maathai toured the world, speaking out against environmental degradation and poverty, which she said early on were intimately connected. But she never lost focus on her native Kenya. She was a thorn in the side of Kenya’s previous president, Daniel arap Moi, whose government labeled the Green Belt Movement “subversive” during the 1980s.

Mr. Moi was particularly scornful of her leading the charge against a government plan to build a huge skyscraper in one of central Nairobi’s only parks. The proposal was eventually scrapped, though not long afterward, during a protest, Dr. Maathai was beaten unconscious by the police.

When Mr. Moi finally stepped down after 24 years in power, Dr. Maathai served as a member of Parliament and as an assistant minister on environmental issues until falling out of favor with Kenya’s new leaders and losing her seat a few years later.

In 2008, after being pushed out of government, she was hit with tear gas by the police during a protest against the excesses of Kenya’s entrenched political class.

Home life was not easy, either. Her husband, Mwangi, divorced her, saying she was too strong-minded for a woman, by her account. When she lost her divorce case and criticized the judge, she was thrown in jail.

“Wangari Maathai was known to speak truth to power,” said John Githongo, an anticorruption campaigner in Kenya who was forced into exile for years for his own outspoken views. “She blazed a trail in whatever she did, whether it was in the environment, politics, whatever.”

Wangari Muta Maathai was born on April 1, 1940, in Nyeri, Kenya, in the foothills of Mount Kenya. A star student, she won a scholarship to study biology at Mount St. Scholastica College in Atchison, Kan., receiving a degree in 1964. She earned a Master of Science degree from the University of Pittsburgh.

She went on to obtain a doctorate in veterinary anatomy at the University of Nairobi, becoming the first woman in East or Central Africa to hold such a degree, according to the Nobel Prize Web site. She also taught at the university as an associate professor and was chairwoman of its veterinary anatomy department in the 1970s.

A day before she was scheduled to receive the Nobel, Dr. Maathai was forced to respond to a report in The East African Standard, a daily newspaper in Nairobi, that she had likened AIDS to a “biological weapon,” telling participants in an AIDS workshop in Nyeri that the disease was “a tool” to control Africans “designed by some evil-minded scientists.”

She said her comments had been taken out of context. “It is therefore critical for me to state that I neither say nor believe that the virus was developed by white people or white powers in order to destroy the African people,” she said in a statement released by the Nobel committee. “Such views are wicked and destructive.”

In presenting her with the Peace Prize, the Nobel committee hailed her for taking “a holistic approach to sustainable development that embraces democracy, human rights and women’s rights in particular” and for serving “as inspiration for many in the fight for democratic rights.”

Dr. Maathai received many honorary degrees, including an honorary doctorate from the University of Pittsburgh in 2006, as well as numerous awards, including the French Legion of Honor and Japan’s Grand Cordon of the Order of the Rising Sun. She was the author of several books, including “Unbowed: A Memoir,” published in 2006.

She is survived by three children, Waweru, Wanjira and Muta, and a granddaughter, according to the Green Belt Movement.

Former Vice President Al Gore, a fellow Peace Prize recipient for his environmental work, said in a statement, “Wangari overcame incredible obstacles to devote her life to service — service to her children, to her constituents, to the women, and indeed all the people of Kenya — and to the world as a whole.”

In her Nobel Prize acceptance speech, Dr. Maathai said the inspiration for her work came from growing up in rural Kenya. She reminisced about a stream running next to her home — a stream that has since dried up — and drinking fresh, clear water.

“In the course of history, there comes a time when humanity is called to shift to a new level of consciousness,” she said, “to reach a higher moral ground. A time when we have to shed our fear and give hope to each other. That time is now.”

A version of this article appeared in print on September 27, 2011, on page A25 of the New York edition with the headline: Wangari Maathai, Peace Prize Laureate, dies at 71.