Ten coast redwood saplings were delivered to Edmonds on March 7, 2017. 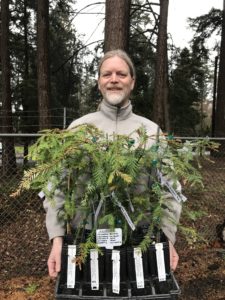 Jesse Curran, Edmonds Parks Maintenance Lead, accepts delivery of ten redwood saplings for the City of Edmonds on March 7, 2017. These trees will soon be planted in Yost Park in Edmonds.

All ten redwood saplings were planted in Yost Park by Aiden Curran between March 8 and March 26, 2017. Some were planted at higher elevations, and others were planted part way down the valley, accessible by foot trails.

“Yost Memorial Park today contains one of the few areas of native vegetation that remain in Edmonds. The mixed stands of Western red cedar, red alder, big-leaf maple and western hemlock trees offer a glimpse into the past, and the future.

The Park is situated along Shell Creek and the deep ravine its waters carved over time. Shell Creek empties into Puget Sound north of Caspers Street, and is populated with numerous insects, amphibians, and even salmon!

Yost Park was logged in the early 1900’s, and the large evergreen logs were processed into shingles and lumber in mills along the Edmonds waterfront. Deciduous trees such as red alder subsequently “colonized” the logged area, and over time bacteria in the alder trees’ roots fixed nitrogen from the air, storing it in root nodules which replenish depleted soil nitrogen. As the short lived Alders (50 – 70 yrs.) begin to die and fall, a new generation of evergreens will take their place, supported by the revitalized soil. The next half century will see Yost Park once again dominated by native evergreen trees.”

Along with those native evergreen trees will be ten coast redwoods, clones of giant coast redwoods from California.  Two of the redwood saplings planted in Yost Park are clones of the Fieldbrook stump. 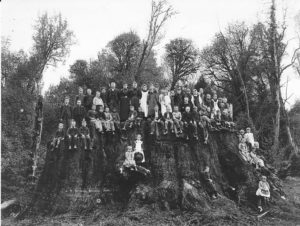