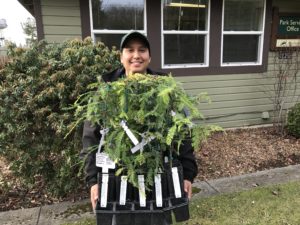 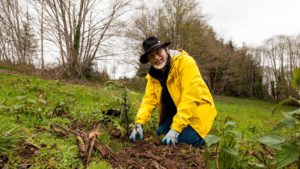 Here is local Tree Guru, Olaf Ribiero planting the final tree at Sakai park. The park foundation and Sustainable Bainbridge held an event for Earth Month, called Celebrate Trees, and the planting was completed April 8, 2017, by Olaf and a few volunteers. Protective cages have been put in place around each of the tiny trees.

Emily Helgeson, Bainbridge Island Metro Park and Recreation District Volunteer Specialist, sent the following three photos of the redwood sapling plantings that occurred on the Sakai property on Bainbridge Island on March 21, 2017.  According to Emily, “I had an amazing time planting with 30 young students who will continue to visit ‘their trees’ and monitor their progress.” 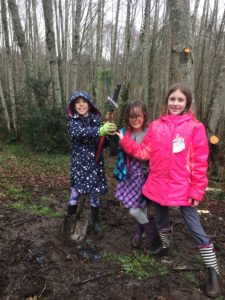 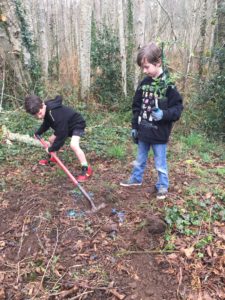 Getting the earth ready for a redwood giant-to-be at Sakai Park on Bainbridge Island.

Planting these redwood trees will be a memorable day for these kids on Bainbridge Island.

Redwood grove to be planted in Bainbridge park

BAINBRIDGE ISLAND — The saplings sitting out on Anne Lovejoy’s deck are tiny and fragile now. Yet locked away in their genetics is towering potential.

They’re coastal redwood trees, cloned from Northern California’s iconic giants. Lovejoy is watching over the 10 trees for the Bainbridge parks district during the winter months. They soon will be taken to Sakai Park, where they’ll be planted as part of an effort to expand the redwood’s footprint around Puget Sound.

Bainbridge Island is one of about 30 communities in the region that are receiving redwood cuttings through the program Moving the Giants to Puget Sound. More than 300 of the saplings will be planted in the region as part of the effort, according to organizer Philip Stielstra.

The work is a way to preserve the genetics of the redwood tree and its environmental value, Stielstra said. It’s also about preserving the experience of stepping foot in a redwood grove, which, for Stielstra and others like him, is like walking into a massive, majestic cathedral.

“It’s an amazing experience,” he said. “… Why not share the beautiful nature of that tree around Puget Sound for more to experience?”

California’s coastal redwood trees can reach heights of more than 300 feet over their long lifespans, which in redwood parks average 500 to 700 years.

The 10 donated redwood trees cloned from the Redwood National Park in California will be planted in Sakai Park on Bainbridge Island. (Photo: Larry Steagall / Kitsap Sun)

The saplings came to Bainbridge from Northern California via the Archangel Ancient Tree Archive, a Michigan nonprofit dedicated to preserving the world’s old-growth trees. After Archangel crews snip sprouts from existing redwood trees and stumps, the clippings are taken back to Michigan, where they are cleaned and treated to promote growth and readied for planting.

Each of the saplings is an exact genetic copy of its ancient “parent” tree. One of the Bainbridge sprouts came from the base of the Fieldbrook tree, a massive redwood that measured about 32 feet across at its base. While the tree was felled in the late 1800s, its stump still produces sprouts, Stielstra said. Were the Fieldbrook tree alive today, it’s estimated it would be more than 400 feet tall and about 3,500 years old, Stielstra said.

One of the redwood trees to be planted at Sakai Park comes from the stump of the Fieldbrook tree, which was felled in the late 1800s. The stump still produces tree sprouts. (Photo: Contributed image / Bainbridge Island Metro Parks & Recreation District)

The same genetics in that giant exist in one of the new Bainbridge trees, which now sits a timid foot tall. Though the trees are small now, they’re expected to take off quickly once planted, according to parks district horticulture manager Bre Ganné.

While it remains to be seen how the grove will fair on Bainbridge, those involved with the project hope to see the famous trees last well beyond their own lifetimes.

“We have an interest in keeping them alive for the next 3,000 years,” Ganné said. “Sounds good to us.”

Will the trees still be on Bainbridge once the year 5017 rolls around? 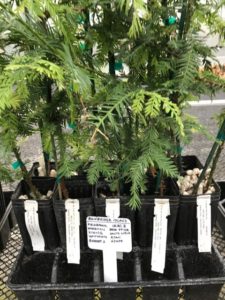