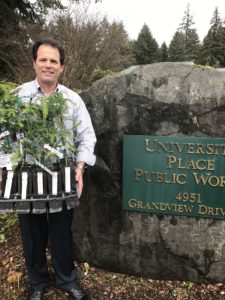 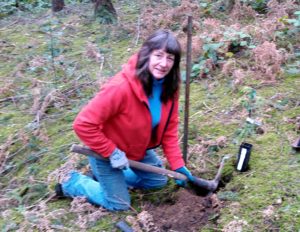 Susan Haney preparing a planting spot for a redwood sapling in the Paradise Park Pond natural area of University Place on January 12, 2017. 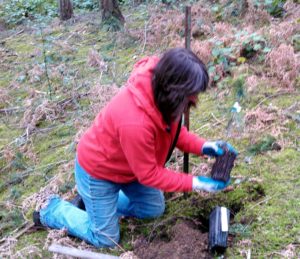 Unloosening the sapling from its container. 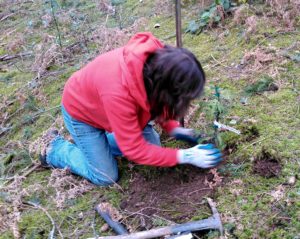 Making sure the sapling is planted at the correct depth. 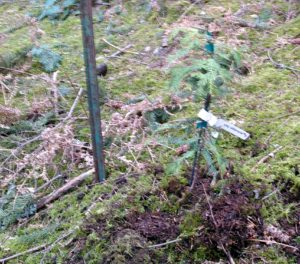 Voila! There you have it. A clone of the Wiedmann #3 giant which will be a giant itself one day.

Now all it needs is a good drink of water to make sure its roots are kept moist, but not too moist as to be soggy. 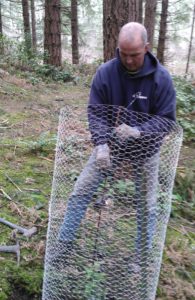 And protection from deer, rabbits, rodents and other herbivores. 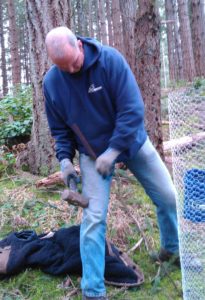 On a personal note, I would like to say that I was able to visit the four redwood saplings planted in Adriana Hess Wetland Park on Jan 12 while returning to Seattle from a visit to Olympia on Jan 26.  When I found the first tree, there was a woman standing in front of it almost in a meditative pose.  When I greeted her, she explained that she lives in the neighborhood and that she and her cat visit the tree each day and that she had even named it.  I asked her what name she had given it.  The name she had given the tree was “Faith.”  The second redwood sapling nearby she had named “Hope.”  I asked her if she was aware there were a total of four redwood trees planted in the park.  She said she knew that but she hadn’t found the other two.  When she learned that I was the one who had donated the trees to the park, she was so happy to be able to learn more about the trees.  We talked some more and then I went to look for the other two newly-planted redwood saplings.

Sure enough, there they each were, tucked into the woodlands with protective screens around them to prevent damage from deer, rabbits and other herbivores.  I returned and offered to show her the remaining two trees.  She was eager to know where they were located.  Upon seeing the third tree, she said she would name it “Love.”  When we came upon the fourth redwood sapling, I asked her what name she would give it.  She wasn’t sure at first, and asked me to name it.  I deferred, saying that since she is the one that visits the trees, she should be the one who named it.  She named it “Charity.”  And so it shall be: Faith, Hope, Love and Charity, all ready to grow into giant trees and watch over the entire Adriana Hess Wetlands in the coming years. 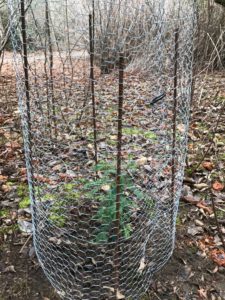 “Faith” was the name given to this redwood sapling cloned from a giant redwood on the campus of UC Santa Cruz and planted on Jan 12, 2017. The screen placed around each of the trees is for protection from deer, rabbits and other herbivores. 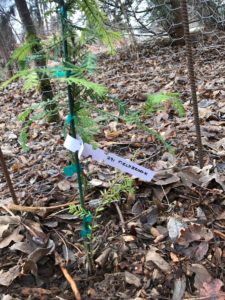 “Hope” was the name given to this redwood sapling cloned from the Fieldbrook stump and planted in Adriana Hess Wetland Park in University Place on Jan 12, 2017. The Fieldbrook stump had a circumference at ground level of 109 feet, as shown in the following photograph. 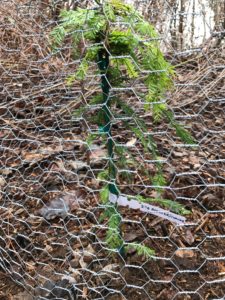 “Love” – was the name given to this redwood sapling. Buegler/Swains was the mother tree of this redwood giant-to-be. 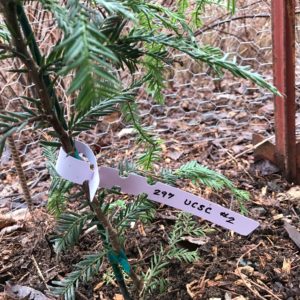 “Charity” was the name given to fourth redwood sapling planted at Adriana Hess Wetland Park. 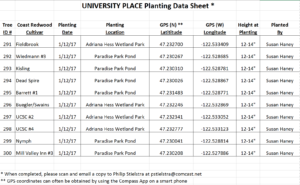 All 10 of the redwood saplings for University Place were successfully planted in two parks, Adriana Hess Wetlands Park and Paradise Park Pond Natural Area, on Jan 12, 2017. 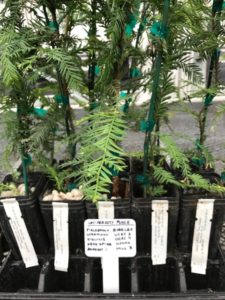