Ten coast redwood saplings were delivered to Lacey on January 9, 2017. 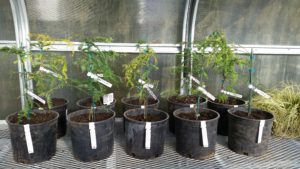 Initial transplanting was completed on 1/12/2017. Trees were taken from original planting containers and potted into #3 containers. Potting media consisted of mushroom compost, sand, topsoil, and vermiculite. Trees will be left in Lacey greenhouse for duration of winter and be moved outdoors in the late spring of 2017.  Photo courtesy of Zach Landgraf.